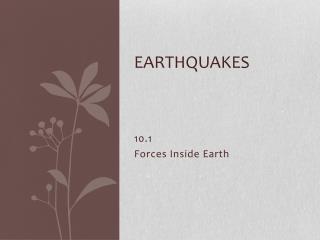 Earthquakes. 10.1 Forces Inside Earth. Causes of Earthquakes Passing the Elastic Limit Causes Faulting Earth’s rocks will bend and stretch up to a point After that point, rocks may break Faults – area where rocks move when elastic limit is passed Faults form along plate boundaries Anatomy of an Earthquake - . seismic waves and the shadow zone. what are earthquakes?. sudden release of energy in the