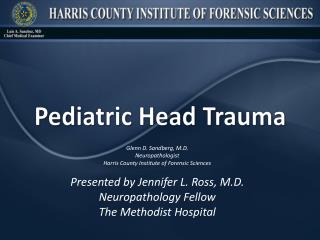 HEAD INJURY AND INTRACRANIAL HYPERTENSION - . head injury. major cause of morbidity and mortality in children leading

Head Injury - . head injury. any trauma to the scalp , skull , or brain head trauma includes an alteration in

General Concepts in Pediatric Trauma Care - . objectives. at the conclusion of this presentation the participant will be