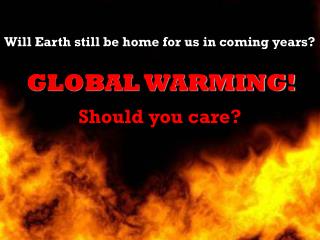 Will Earth still be home for us in coming years? GLOBAL WARMING! Should you care? Our planet is heating up … … and we are responsible Unless we take steps NOW to curb global warming, our way of life , our future , and our family are all in GRAVE DANGER . What is Global Warming?

Global Warming - . will human-induced climate change destroy the world?. introduction. is the world getting warmer? if