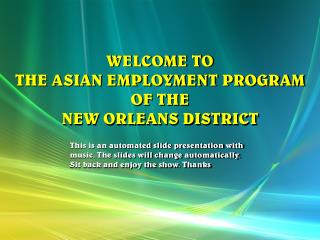 The Battle of New Orleans - . the final battle of the 1812 war by daniel steele. did you know?. throughout the 2 months

The Axeman of New Orleans - . the legend of &quot;the axeman of new orleans&quot; is a brutal tale of savage

Welcome to the Zone-Level District Trainer Program - . helping you to plan and conduct training meetings that support

The History of New Orleans’ Cuisine - . antoinette richardson. where did this style

Serving the Needs of New Orleans - . presented to the louisiana board of regents february 8, 2011. louisiana parish by

New Orleans Analyzing the Image of the City - . by: randi crowder.

US Army Corps of Engineers New Orleans District Morganza to the Gulf Systemwide Model - . a. malene henville 23 may 2008.

WELCOME TO THE Alabama New Principal Mentoring Program - . a workshop for district liaisons. think-pair-share. take a

Welcome to the Pre-Employment Workshop - Overview . starting your job huntdifferent types of employment where to look for