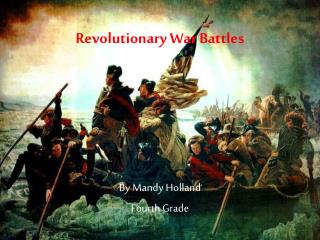 Revolutionary War Battles. By Mandy Holland Fourth Grade. Fort Ticonderoga May 1775. During the American Revolution, Fort Ticonderoga located on the western side of Lake Champlain in New York was an important post on the route from Canada to the colonies.

Revolutionary Lit - . midterm 2011 review. paine argues that the best way to defeat the british is for … the troops of

Quickwrite: - . to what extent had the colonists developed a sense of their identity and unity as americans by the eve of

Millennium MRI - . a long time ago . . . but not in a galaxy far, far away. the wcab decided the outcome of battles

CHAPTER 11-THE CIVIL WAR - . section 1 notes-from bull run to antietam. section objectives. what was the significance of

Leon Trotsky - . annette miramontes period 1. a young revolutionary. leon trotsky was born to a jewish family with the

The Revolutionary Era - . chapter 4. war and diplomacy. the 18 th century was an interesting juxtaposition of the