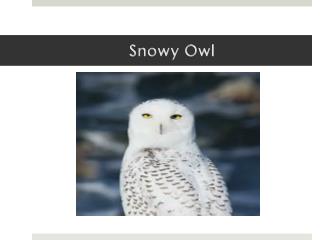 SNOWY OWL - . endangered species. a species that is in danger of becoming extinct. typical size. up to 27 inches.

THE SNOWY OWL - . by john chiarovano. habitat. the snowy owl lives in open tundra and meadows in alaska , greenland,

Snowy owl group 1 - . snowy owl size. in winter they are camouflaged in the snow. the female is darker than the male,

The Beauty of the Snowy Owl

Snowy owls - . by brynn bowling. introduction. this animal is a very interesting creature, it’s a snowy owl. i am

Snowy Owls - . by: victoria allison. awesome. snowy owls are awesome animals. hunting. you are going to now learn about