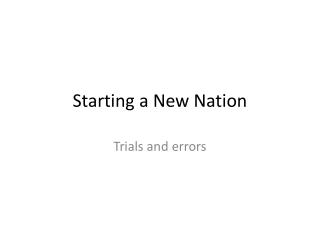 Starting a New Nation. Trials and errors. The Young Nation. Should the new nation be 13 independent countries or is it one united country?. The Young Nation. During the Constitutional Era, the Americans made two attempts to establish a workable government based on republican principles.

ELECTRICAL I LESSON 4 STARTING SYSTEM BASICS - . the purpose of the starting system is to crank the engine at

Starting and growing transplants under lights - Curtis swift, ph.d. colorado state university extension what it is?