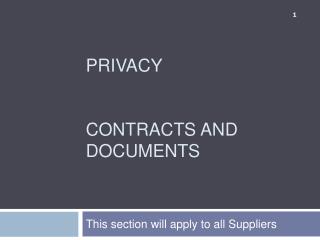 PRIVACY CONTRACTS AND DOCUMENTS. This section will apply to all Suppliers. CONSUMER'S RIGHT TO PRIVACY. Direct marketing. Contracts and Invariants - . section 6.2 (jia’s). design by contract --- dbc. each class interface defines a set of

Contracts and Warranties - . why do i need to know this?. because you will sign thousands of contracts in your lifetime.

Grants and Contracts - . changes, changes, and more changes... what would this university be without changes? heather l.

Finance and Contracts - . why should a teacher or principal want to know about school finance?. funding for education.

ContractS and tenderS - . contract document. what is a contract? when two or more persons have common intention