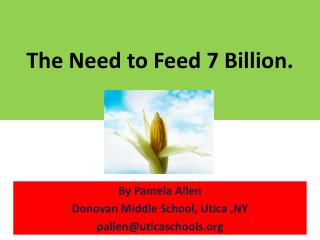 The Need to Feed 7 Billion. By Pamela Allen Donovan Middle School, Utica ,NY pallen@uticaschools.org. T oday’s population situation. In 2011, the world’s population of humans hit the 7 billion mark. Click on the heading above to get a more exact number for today. The Need to Feed - . every meal reminds us that we are heterotrophs, dependent on a regular supply of food in general,

Overview: The Need to Feed - . food is taken in, taken apart, and taken up in the process of animal nutrition in general,

Need to Feed Volunteer Work - . by : will peters. it was held at first united methodist church of katy. people going

Wait, I need to feed them? - . how to help your microfauna positively affect your health. there are how many in me?. for

Our F uture Role in the International A rena the need to feed 9 billion people by 2050 - Dimensions of development: an

India @ 7 Billion - . tapping the strengths we have, to leverage the opportunities we will get. up a head. population

India @ 7 Billion - . tapping the strengths we have, to leverage the opportunities we will get . up a head. population

TO FEED OR NOT TO FEED - . that is the question. performance audit findings february 2008. meals served to staff not on

Shrimp Feed Market Cross US$ 7 Billion by 2024 and CAGR 3.4% - Get more information about the market:

Will the World Be Able to Feed a Population of 9 Billion? - . ben cmejla and ben rubin. what it takes to feed one person: