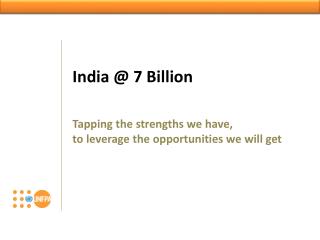 India @ 7 Billion . Tapping the strengths we have, to leverage the opportunities we will get . Up A head. Population dynamics Socio-economic and reproductive health status Strategic focus Youth Ageing Sex Selection Way forward. “ We are 7 billion people with India @ 7 Billion - . tapping the strengths we have, to leverage the opportunities we will get. up a head. population

7 Billion and Beyond - What does it all mean?. 7 billion and beyond. population pyramids. the basics: notice the

The world with 7 billion people… - . what does it look like?. first up, a pop quiz- not really a quiz, so stop

From 6 Billion to 7 Billion: How Population Growth is Challenging Our World - . a presentation by robert j. walker