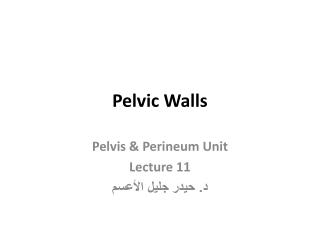 Pelvic Walls. Pelvis & Perineum Unit Lecture 11 د. حيدر جليل الأعسم. The Pelvis. It is the region of trunk that lies below abdomen and it is continuous with abdominal cavity. Bony Pelvis: Learning Objectives Pelvic Walls and Floor - A. understand the position, attachments and major divisions of the pelvic

PELVIC FLOOR (PELVIC DIAPHRAGM) - . dr. narayani b.h. it is a muscular partition which separate the pelvic cavity from

Pelvic Exam - . once a woman begins having sex or reaches age 16-18, she should have regular pelvic exams. (once a year)

Pelvic Girdle - . 1 st year 1 st quarter. hip. *ap affected hip **if this is the initial exam of the hip you might need

PELVIC FLOOR - . perineal body is essential for the integrity of the pelvic floor, particularly in females. levator ani-