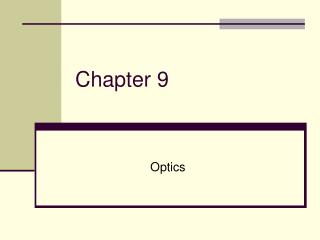 Chapter 9. Optics. Light waves. Light generally refers to the narrow band of EM waves that can be seen by human beings. These are transverse waves. The frequencies range from 4 × 10 14 to 7.5 × 10 14 hertz. Light waves , cont’d. We typically express the wavelengths in nanometers .