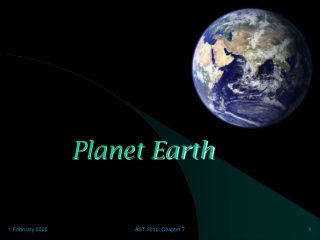 Planet Earth. Basic Facts. The Earth is a medium-sized planet with a diameter of 13,000 km It is one of the inner or terrestrial planets It is composed primarily of heavy elements , such as iron, silicon, and oxygen Earth - . the model planet. if you encountered another planet, what would you want to learn about it?. basic physical

The Earth as a Planet - . what makes earth unique? what characteristics does earth share with the other planets of the

Earth - . the planet we live on. earth is the third planet from the sun and is the largest of the terrestrial planets .

Planet Earth – Could There be Life? - . presentation by: heather deroy. discovery of new planet!. planet earth, a part