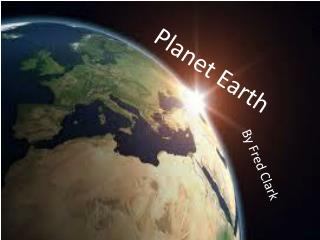 Planet Earth. By Fred Clark. What is a Earth?. Earth is the planet where we (the humans) and millions of different species live on. Earth is also a “planet.” Planet Earth - . chapter 2. 2.3 explain how the relationship between earth and sun is critical to the study of geography.