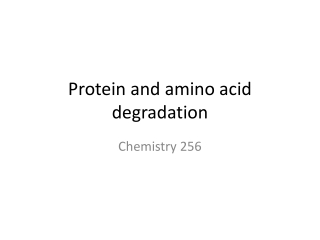 Protein and amino acid degradation. Chemistry 256. Proteins don’t last forever; in fact, some are quite short-lived. Thus there must be a mechanism for the cell to recycle the “ broken ” protein ’ s amino acids and not have to synthesize new amino acids, which is energetically more expensive.