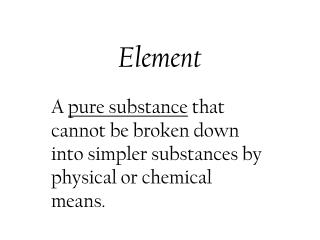 Element. A pure substance that cannot be broken down into simpler substances by physical or chemical means. Elements are considered pure …. …because all of the particles are identical. The smallest possible particle of an element is called an atom of that element. Element - S and compounds. non-metals. extraction of sulphur. element. objective:. compounds. a compound is a substance

Element - . an element is a substance composed of only 1 type of atom. all atoms of an element are alike. compounds.

ELEMENT - . there are 108 elements in nature. structure of an atom. atoms are the smallest particle of an element that

Element Project - . by ms. radke. hydrogen. has 1 proton and 0 neutrons combines with chloride to form hcl or h ydrogen c

Element Riddles - . who am i?. example. i am part of all that lives, when combined with oxygen, i make the “fizz”,

Element VI - . similar figures. definition 1 similar rectilinear figures are such as have their angles severally equal

Element Fragmentation - . authors:. date: 2014-01-21. abstract. the presentation discusses on: the format of the

Literary element - . &amp; their definitions. s hort s tory. a brief work of fiction which presents a sequence of