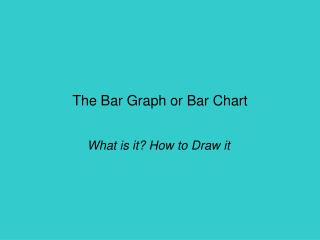 The Bar Graph or Bar Chart. What is it? How to Draw it. What is a Bar Graph?. A bar graph is a graph that displays the frequency or numerical distribution of a categorical variable, showing values for each bar next to each other for easy comparison. Alternate Name: Bar Chart . Data Analytics: Supercomputers &amp; Graph Analysis - . tim white tim@yarcdata.com. what is a graph ? . not a chart a

Academic Integrity - . examples. example. how do i get the line on this graph to go straight?. use an xy scatter instead

Working with Charts - . objectives. plan a chart create a chart move and resize a chart change the chart design.

Learning How to Graph! - . by: kari klarich. click on graph to start!. what you need to know about graphing:. what is a

Graph Algorithms - . why graph algorithms ? it is not a “graph theory” course! many problems in networks can be

Pie Charts and Bar Graphs - . august 23, 2011. the pie chart. example pie chart. draw a circle change the percent to a