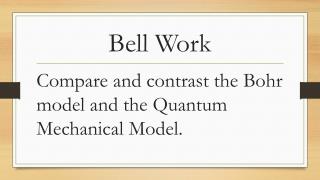 9/13/11 World Literature Bell Ringer Place the commas and semi-colons where appropriate - . i do not like to eat tacos

Bell Ringer: - . based on what you already know about the influences of geography on people and the development of

Bell Work - . main word/ idea: population(s) 1. write as much information as you can about:_

The Bell - . a translation of hans christian andersen's &quot;klokken&quot; by jean hersholt . . in the narrow