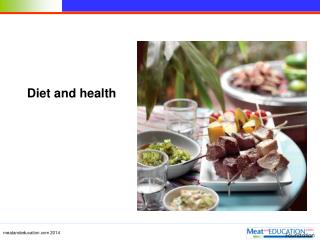 Diet and health. Foundation. A balanced diet. A healthy diet should be based on a range and variety of different foods, as shown below. An unbalanced diet can lead to dietary related diseases. Malnutrition. HEALTH AND DIET - . a state of complete physical, social and mental well-being. the ability to meet the demands of your

Health diet - After eating the food, it is digested and broken down into glucose which provides energy and powers our

Diet Health - Background for this presentation. 1dr. bapalal vaidya :- who was an authority on health and ayurved. he has

Homeopathy, Diet and Health - Taking a holistic viewpoint hahnemann, organon aphorism 36 - 38 only one disease can exist

Homeopathy, Diet and Health - . taking a holistic viewpoint. hahnemann, organon aphorism 36 - 38. only one disease can

FITNESS, DIET and HEALTH. - Fitness, diet and health. prepared by noha salah. what is your favorite food?. do you want to

chapter 11 diet and health - Leading causes of death. diseases that afflict people and cause death fall into 2

Health Expert Diet - Weight loss reviews:- it is close to home exhortation that each hefty individual should utilize

Keto Health Diet - Like red meats and nuts can be costly, kleinman said. keto-branded products like keto coffee and

Yoga and Diet For Prostate Health - A comprehensive guide to a healthier prostate.the prostate gland is a bloke