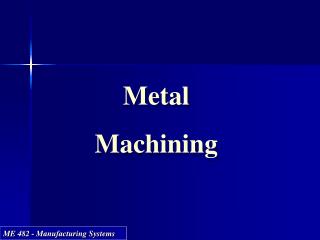 Replace Machining Coolant with Advanced Metal Working Fluid - There is the old way which uses flood coolants, these are

Influences of machining parameters on metal removal rate MRR and accuracy in electrochemical machining - . prepared by

Machining - . it is a metal removing operation from the work piece with the help of machine tools and cutting tools.