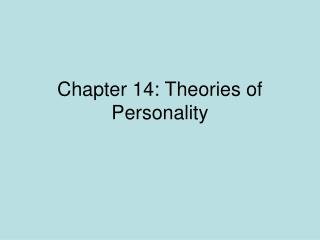 PERSONALITY - . chapter 11. what is personality?. an individual’s unique patterns of thoughts, feelings, and behaviors

Theories of Personality Michael Jackson - . a composite of the ways in which individuals relate to others and adapt to

Chapter 11 - . personality. questions we will be addressing in this chapter. how did paralyzed patients lead freud to

Chapter 1 - . personality theory: from everyday observations to systematic theories. questions to be addressed in this

Chapter 4 - . personality and emotions. after studying this chapter, you should be able to:. explain the factors that

PERSONALITY - . a look at personality theories and assessments. what is personality ? people differ from each other in

Personality Theories - . chapter 11. features of personality. characteristic: must be seen in many or all people to be of

Personality and Individuality - . theories of personality. why do we create theories?. looking for patterns in the way