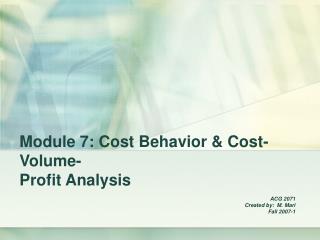 Cost-volume-profit analysis - Objectives. you should be able to:. distinguish between fixed costs and variable costs. use

Cost-Volume-Profit Analysis - . chapter 19. types of costs. the effect of volume of activity on costs variable costs

Cost-Volume-Profit Analysis - . chapter 7. cost volume profit analysis. what is the break-even point? what is the profit