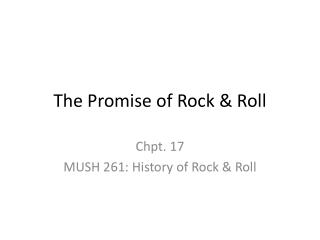 History of Rock and Roll - Origins of rock and roll rock and roll: a form of music that evolved in the us in the

Rock n Roll - Facts about 50's music. the classic rock age only lasted 5 years 1954-59began in the usa with a mixture of

The Birth of Rock &amp; Roll - . inventions/innovations in the 1950’s influential musicians /changes to rock music.

Rock and Roll - . 1950’s to today!. post wwii. a time of economic prosperity. a new optimism for the future led to the