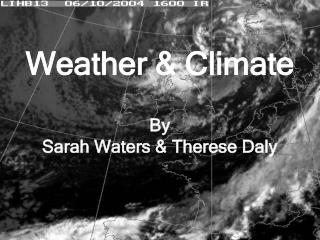 Weather & Climate By Sarah Waters & Therese Daly. What is Weather?. Weather describes the conditions in the atmosphere and the air around us at a particular moment. Weather is always changing. Air Masses Influence Weather. Tropical maritime – warm and moist Tropical continental – Weather Maps - Weather &amp; climate. weather maps. weather is the state of the atmosphere at any one place or time .

Global Warming - . climate. climate: the average weather conditions over a period of years in a particular place climate

The Atmosphere - . meteorology is the study of the atmosphere and the processes that cause weather. i. weather vs.

Weather theory - . kyle black carol cushman. environment and flying. as pilots, do you need to have a basic understanding

Types of Severe WEATHER and Fronts - Objective: can i use meteorological data to predict weather?. types of severe

What is climate ? - . the pattern of weather that occurs in an area over a long period of time, such as 30 years. it