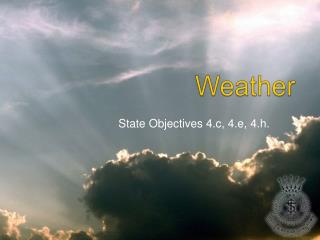 Weather. State Objectives 4.c, 4.e, 4.h. . Discussion. What are some ways in which weather affects your everyday life?. What is Weather?. Atmosphere layer of gases surrounding Earth. Weather is the conditions of the atmosphere. Temperature Air Pressure Humidity Wind Clouds