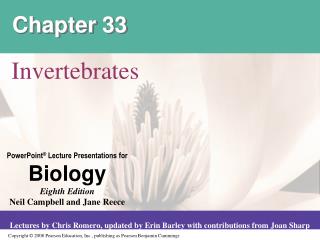 Chapter 33. Invertebrates. Overview: Life Without a Backbone. Invertebrates are animals that lack a backbone They account for 95% of known animal species. Fig. 33-2. Calcarea and Silicea. ANCESTRAL PROTIST. Cnidaria. Lophotrochozoa. Common ancestor of all animals. Eumetazoa.