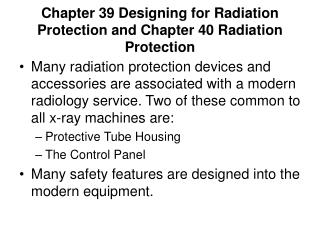 Chapter 39 Designing for Radiation Protection and Chapter 40 Radiation Protection. Many radiation protection devices and accessories are associated with a modern radiology service. Two of these common to all x-ray machines are: Protective Tube Housing The Control Panel DESIGNING FOR RADIATION PROTECTION - . tube housing. reduces leakage to less than 100 mr per hour at a distance of one