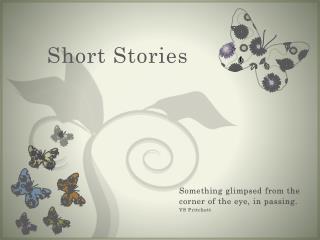 Short Stories. Something glimpsed from the corner of the eye, in passing. VS Pritchett. Definition: Short Stories. condensed fictional narrative that is usually written in prose. They normally have a small number of characters involved in a single action with one theme. . Short Stories - . by: steph martin. edger allan poe. was known as the first american short story writer in the 1800’s

Short Stories - . about the authors literary terms story plot. story plot. setting – where and when the story occurred.

Short Stories - . the long, and short of it!. setting. can be used to set the atmosphere for the

Short Stories - . inference and irony. educated guess. inference. what is a contrast between what is expected and what

Short Stories - . narrators, themes, symbolism, irony. point of view. perspective is how we see something. for example:

Short stories - . prior knowledge. connecting something new to something you already knew. predictions. using your

Short Stories - . terms and plot diagram. the short story. a work of fiction written in prose, usually in a narrative

Short Stories - . m. jones - english. there will be a test at the end of this unit  take notes. what is a short