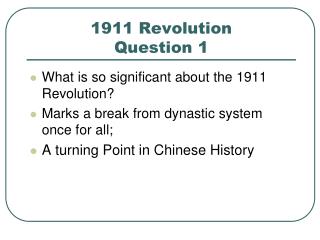 1911 Revolution Question 1. What is so significant about the 1911 Revolution? Marks a break from dynastic system once for all; A turning Point in Chinese History. Three People’s Principles ( East Asia 450-452) Three policies. Nationalism Democracy People’s livelihood. ally with Russia, Chinese Revolution of 1911 - . kasey paine. change. main causes that led to the revolution. internal decline of the

Russian Revolution Essential Question : - How did vladimir lenin &amp; the bolsheviks transform russia during the

Question 1 - . could the 2004 athens olympics have been a success without all of the networks and backup technologies?.