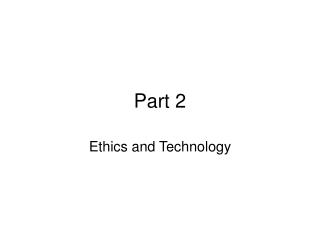 Part 2. Ethics and Technology. Objectives. 1. Examine the relationship between ethics and technology. 2. Describe science or technology based ethical issues and conflicts. 3. Define technology. 4. Discuss different ways that technology can create a positive impact on society. . Ethics.