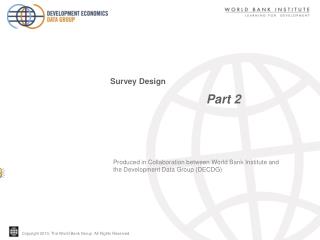 Survey Design. Part 2. Produced in Collaboration between World Bank Institute and the Development Data Group (DECDG). C. Who should be measured (units)?. What unit of measurement should be used? Businesses are inappropriate for labor force surveys.