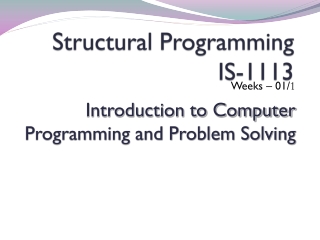 Fundamentals of structural programming - Bad programming habits. foggy idea about what is to be done write program with

WELCOME TO CLS 1113 - . introduction to clinical laboratory practices. laboratory safety. how safe are you???? we can

Topic 4: Structural and Object Oriented Programming - . visual programming. learning outcomes. by the end of this topic,

WHAT IS PROGRAMMING? - . aspects of programming computer languages objects and object-oriented programming. many aspects