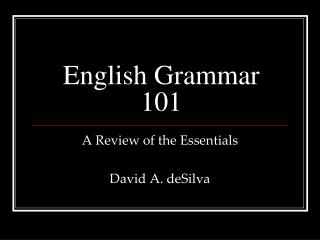 EasyEnglish - . what is easyenglish?. a reduced vocabulary and reduced grammar — but perfectly good standard english. a

Common English Grammar and Usage Problems - . someone forgot their grammar. it was a lesson for he and i. the first of

English Grammar Review - . part i: categories of words. what is grammar?. a : the study of the classes of words, their

Advanced Syntax - Lecture 12: universal grammar. advanced syntax. in looking at english data, we have been building a

ENGLISH - . nouns. topic objectives. at the end of the topic students should be able to: understand and be aware of their