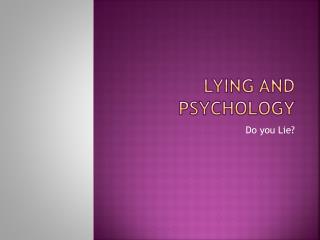 Lying and Psychology. Do you Lie?. What is a lie?. Psychology of Lying - . how and why lying is an art…. psychology of lying. three criteria relevant to a statement be

LYING - . is in the hell-fire. major sin. what is it ? unless you repent &amp; ask forgiveness from it (lying)… it

Lying - . definition:. 1.a false statement made with deliberate intent to deceive; an intentional untruth; a falsehood.

Lying and deception: - . theoretical perspectives on non-verbal cues to deception. what are the characteristics of

Lying and deception: - . theoretical perspectives on non-verbal cues to deception. what are the characteristics of

Lying and Deception - . write down (to turn in, no names, necessarily): . 1) define lying 2) an example of a morally

Lying - Unit 3. lying. u nderstand the main idea and structure of the text ; m aster the writing skills in expository

Lying - . is it worth it?. definition a lie (also called prevarication, falsehood) is a known untruth expressed as truth

Lying Contest - . a hypothesis testing demonstration from introductory statistics. “though i am not naturally honest, i

Lying with maps - . propaganda, power and responsibility. where we are going today…. maps as political how to lie why