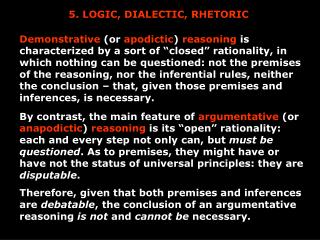 Dialectic and Rhetoric in Political Argumentation - . between strategic maneuvering and critical discussion. political

Rhetoric and Logic: a review - . we already know:. rhetoric is the proper, and classic, form of persuasion. we already

Dialectic(al) –adjective - . di·a·lec·tic [dahy- uh -lek-tik] also, dialectical. of, pertaining to, or of the nature

Dialectic Journals - . mrs. fogelson phhs english warm-up: what are keys to a good conversation with someone? should they

The Dialectic of - . bottom-up and top-down emergence. in social systems.

Chapter 5: Persuasion Through Rhetoric - . what is rhetoric?. rhetoric. rhetoric denotes a broad category of linguistic

TOPIC FACT-FEELING DIALECTIC - . matadors use the cape to protect themselves from the bull, who thinks the cape is part

Rhetoric - . rhetoric is a tricky concept to understand the way someone comes across how someone uses language engage in

Rhetoric - . sl 12.3 – evaluate a speaker’s point of view, reasoning, and use of evidence and rhetoric. on your

Rhetoric - . rhetorical triangle, soapstone , and appeals. rhetoric. “the faculty of observing in any given case the