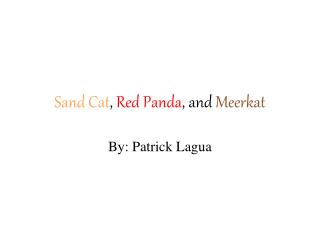 Red Panda - . lesser panda by madi. appearance of the red panda. the red panda is the size of a house cat the panda has

Red Panda - . by: ja’chaurae hankins. introduction. have you ever heard of a red panda ? they are quite interesting.

Randal the Red Panda - . by jordan murray. hello, i’m randal. this is me as a little cub playing with my brother,

Red Panda in India - . at the verge of extinction. the adorably cute red panda. now an endangered

Red Cat Racing - Find great deals of high quality red cat racing products with us. we have a great selection of remote

Cat with Red Fish - Critical analysis of an