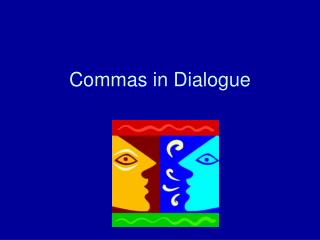 Commas in Dialogue. Punctuating Quotations. To punctuate quotations, you need to know where to put quotation marks, commas, and end marks. A direct quotation is the exact words of a writer or speaker. “ All passengers assemble on deck, ” said the captain. What did the captain say?. Commas, Commas, commas - . the boy worked his paper route, cleaned his room, and walked to school by 8:00 a.m. (commas

Commas in lists - . how to get rid of ‘and’ in our writing. here is a shopping list. eggs milk apples sausages. here

COMMAS IN SERIES - . by rachel waugh amanda childs and jamie gallant 8h. use a comma after every item in a series except

Commas - . how to use them. commas - ,. a comma is a punctuation mark it tells us to take a brief pause when we are

Commas!!! - . by: emily mccreight. definition of a comma. a comma is a punctuation used in a sentence to separate ideas,

Commas - . ,. compound sentences. use a comma before the conjunction to separate the two independent clauses that make up

Commas - . in series, between independent clauses, in nonessential clauses, and after introductory elements. commas in a

Commas - . part i. commas. a comma represents a short pause. they make long sentences easier to read. most used internal

Commas - . commas are way more important tha n you might think. click the link to see how.

Commas - . b ecause a pause is worth a thousand words. i ntroductory element : tells when, where, why, or how the action

Commas - . commas in a series. use commas to separate items in a series the parents hid easter eggs behind rocks , under