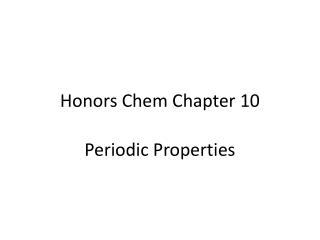 Honors Chem Chapter 10. Periodic Properties. The position of an elem in the periodic table and its properties are determined by the electron configuration of the atom. 10.1 Radii of Atoms. Moving from top to bottom in the table, ea period represents a higher principal quantum number Honors Bio - Chapter 10 - . 0. molecular biology of the gene. viruses - infect cells - gave us some of the earliest

10 honors - Journal prompts . 10 honors. respond to the following quote in at least 8 sentences. “the soul that is

Honors English 10 - . thursday, september 12. procedures. attendance is mandatory we are only meeting 7 times this

English 10 Honors Day 10 - . sit in any student desk for now. when class starts, i’ll rearrange you for the socratic

English 10 Honors Day 10 - . objectives: to examine ways that justice can be viewed through individual actions and moral