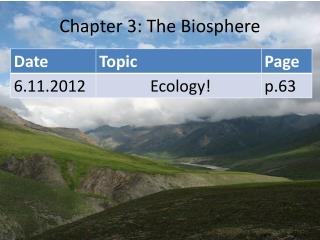 Chapter 3: The Biosphere. Inquiry Activity. In groups of 2-3, you have five minutes to m ake a list of all of the types of organisms, including plants, humans, animals, insects etc that you have seen in a specific location. Rainforest Tundra!. Inquiry Activity.