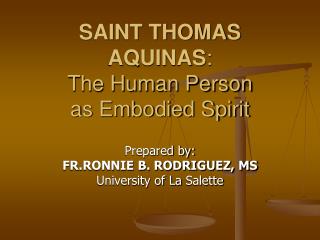 SAINT THOMAS AQUINAS : The Human Person as Embodied Spirit. Prepared by: FR.RONNIE B. RODRIGUEZ, MS University of La Salette. Triumph of St. Thomas Aquinas, Detail of Figure Below the Throne, from the Spanish Chapel, c. 1365 by Andrea di Bonaiuto. Life and Works:. Saint-Thomas - What i saw there. after the 80 countries i visited, my favorite holiday places are