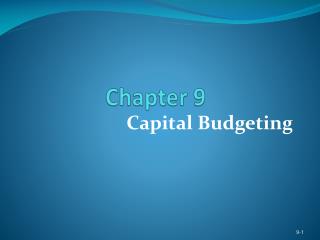 Chapter 9. Capital Budgeting. LEARNING OBJECTIVES. Explain capital budgeting and differentiate between short-term and long-term budgeting decisions . Explain the payback model and its two significant weaknesses and how the discounted payback period model addresses one of the problems.