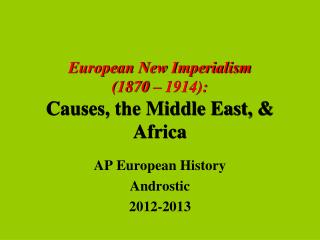 Chapter 21 - . the high tide of imperialism. the spread of colonial rule. q: what were the causes of the new imperialism

American Imperialism 1870-1914 - . us history. essential questions:. 1. does the united states have the right to tell

Imperialism - . what is imperialism?. imperialism is the practice of forming and maintaining an empire. the “mother

THE AGE OF IMPERILAISM - The world and the united states. the age of imperilaism. world history unit. american and world

A Western-Dominated World - . the new imperialism. european imperialism did not start before the 1800’s. imperialism is

Famous People of the Middle East and Africa - . directions: you will be divided into groups of 4. one person from each

Empire Building Leads to World War I (The Great War) “Wars not make men Great” - . ss6h6 the student will analyze the