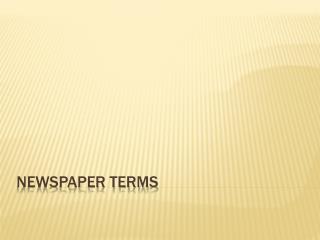 NEWSPAPER TERMS. Flag - The printed title (i.e., name and logo) of a newspaper at the top of the front page. Folio - Newspaper name, date and page number that appear at the top of each page. Banner - A headline stretching across the top of a page . Newspaper/Journalism Terms - . from: dictionary.com. byline. a printed line accompanying a news story, article, or the

Advertisement in Newspaper | Newspaper Advertising | Ad in newspaper - Bookmyadvertisement.com is an excellent platform

Newspaper articles - . today we will learn how to create effective headlines. dogs are left £30m. peas are to stay on a

Newspaper Names - . do you know the names of any newspapers? what does the name mean? what do you know about those

NEWSPAPER STYLE - . the structure of headings and texts. what is style?. a functional style is a system of coordinated

Newspaper Assignment - . specifics. due date: may 29 th should look like a newspaper you may use a word or publisher