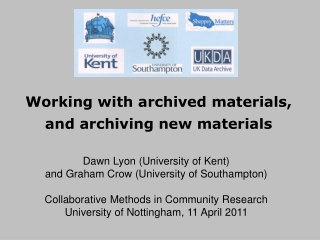 Working with archived materials, and archiving new materials. Dawn Lyon (University of Kent) and Graham Crow (University of Southampton) Collaborative Methods in Community Research University of Nottingham, 11 April 2011. What we’ll do in this session. Safe Working Procedure - Handling Materials - . learning objectives: by the end of this program participants will be

Basic Principles of GMP - . materials. 14. materials. objectives to review specific requirements for each type of

Archiving; and Astrometric Positions - . archiving. important that our observations are archived – data retention

Materials, New and Old - . where do the materials we use come from?. can you guess?. hint: there are three types. natural