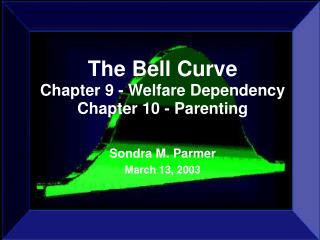 The Bell Curve Chapter 9 - Welfare Dependency Chapter 10 - Parenting. Sondra M. Parmer March 13, 2003. What is (was) Welfare?. Aid For Dependent Children (AFDC) began in the mid-1930s to help widows and abandoned women with children. CHAPTER 9 Perfect Competition and the Supply Curve - . what you will learn in this chapter:. the meaning of perfect

The Bell Curve Thesis - . how your position in the workplace is ultimately determined by your level of intelligence. the

The bell shape curve - . normal distribution fetp india. competency to be gained from this lecture. use the properties

Chapter 9 and 10 - . the united states. overview. 3 rd in population (behind china and india) 3 rd in size (behind russia

Chapter 9 &amp;10 - . formation of europe and the middle ages. chapter 9; section 1. after the fall of the roman