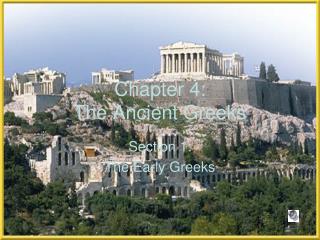 Chapter 4: The Ancient Greeks. Section 1: The Early Greeks. Ancient Greece c. 750 B.C. Greek Colonies and Trade 750–550 B.C. The Geography of Greece. Mainland Greece is a mountainous peninsula —a body of land with water on three sides. Ancient Greece - . dan conroy edu 505. introduction. ancient greece has had a tremendous influence on our world’s

Chapter 19 Learning Objectives The students should be able to: - 1. describe the geocentric theory of the universe held

The World According to the Ancient Greeks - . the ancient greeks believed the world was flat and that greece was at its

Chapter 3 The Greeks From Myth to Reason - . compare the date ranges for significant events: greeks and hebrews. greek

The Influence of the Ancient Greeks - . the arts. adults had enough leisure time to explore the arts terra-cotta

The Story of Early Ancient Greeks - . once upon a time in ancient greece. dark hair. brown skin. short. m i- no - ans. in