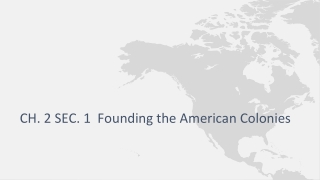 Founding the American Colonies Part 2 - The english find roanoke . sir walter raleigh was sent to scout out the americas

Ch. 1 Sec. 2 - . methods of scientists. 1. which objects in this photograph are used for measuring? 2. for what kind

The English Colonies Ch. 2, sec. 3-4 - . main ideas puritans come to the new world for religious freedom. after the

CH. 2 SEC.1 - . describing matter. goal. students- will learn about matter and its chemical and physical properties.

Founding the Colonies - . objective: to examine the importance of the protestant reformation and the causes and effects

Ch apter . 1 Sec. 2 - . essential question: how did the government of rome develop into an empire?. the roman republic

Founding the Middle Colonies - . in section, you will read about the founding of the middle colonies (such as new york),