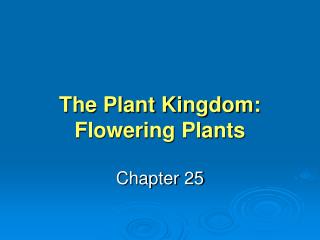 Plant Organs and Tissues - . mr. ramos. introduction to plants. there are over 260,000 different species of flowering

The Plant Kingdom - . objectives: define plant describe the conditions needed for a plant to live successfully on land

Bellwork 1/31 - . the earliest land plants did not have flowers. however, around 70 million years ago, flowering plants

THE PLANT KINGDOM - . all plants:. are multicellular are autotrophic – photosynthetic have cell walls with cellulose

Chapter 22 The Plant Kingdom - . plants. what are plants? eukaryotic, multicellular organisms that have chlorophyll and