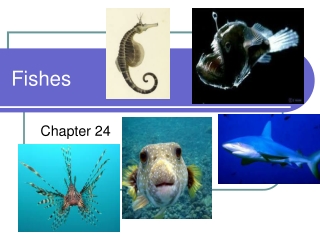 Fishes. Chapter 24. What is a fish?. “Fish” has many usages extending beyond what are actually considered fishes today (e.g., starfish, cuttlefish etc.). Fishes do not form a monophyletic group. One group of fishes contains the ancestor to the land vertebrates (tetrapods) The Fishes - . vertebrate success in water. cool facts about fish. first animal to have a skull to protect their brain.

Ichthyology - . the study of fishes. over half of all vertebrates are fishes! fishes have the following 5 characteristics

Nz fresh water fishes - . by s imon and b lake. e els. there are two main types of eel – the shortfin and the longfin.

Evolution and Classification of Fishes - . morphology of the bony fish. classification. subphylum: vertebrata (45,000

Chapter 31: Fishes and Amphibians - . section 1: fishes. what is a fish?. fishes and other vertebrates have at some time

Marine Fishes - . what is a fish??. classic definition: -any of numerous cold-blooded aquatic vertebrates of the