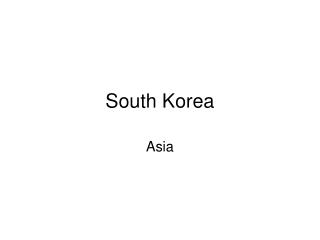 North Korea Vs. South Korea - . where would you like to live?. vs. . north korea. government= communistic dictatorship.

Injustice in South Korea - . introduction. south korea is imprisoning hundreds of male jehovah’s witnesses for their

South Korea - . by: emily eason. fun facts!!!!!. fruit is a luxury. fruit in korea is already expensive but due to high

Korea - At a glance. south korea is a developing country, having been one of the fastest growing economies in the world

BUSAN SOUTH KOREA - . busan is south korea’s second largest metropolis after seoul. it is the largest port city in

Korea - . group 7 ( yesai park, yvonne kim, gina park) period 4. the korean peninsula is off of the east coast of asia